Home
Roundup
"Shock" NHS surveys, another by-election and Northern Ireland back to the polls

By recent standards, the last few days have been eventful for pollwatchers, with three new surveys, two of which included the voting intention question. Opinium’s poll for the Observer had an eight-point Conservative lead (up one from last time) and Survation for the Mail on Sunday had the Tories nine-points ahead (down one).
The “issues” questions were particularly interesting – both ComRes and Survation had the Conservatives ahead of Labour on the NHS… Or rather, they had Theresa May ahead of Jeremy Corbyn on the NHS, which as I explained in the poll alert isn’t strictly the same thing, but still eyecatching given that ComRes found net agreement with the Red Cross verdict that there was a humanitarian crisis in the health service.
Survation also asked who or what was to blame for the current situation (Immigration on 28 per cent and funding on 27 per cent were well ahead) and what people would cut to allow extra health spending (foreign aid won by a landslide with 78 per cent).
With Tristram Hunt’s impending resignation we have a second Westminster by-election to get excited about. Stoke-on-Trent Central isn’t marginal, but voted about 2-to-1 for Brexit on substantially increased turnout, so there are plenty of moving parts. I’ll be publishing my thoughts later in the week, but in the meantime this from Chris Hanretty is worth a read.
Northern Ireland is almost certainly heading back to the polls – the government will formally collapse at 5pm today barring a big surprise. LucidTalk in Belfast will be polling voting intention if an election is called.
Other interesting reads that popped up over the weekend include this from Lewis Baston on the history of splits on the centre-left. And finally, Mark Pack enlightens us on some novel research into candidates on the right apparently being better looking, and better looking candidates getting more votes…
Have a good week! 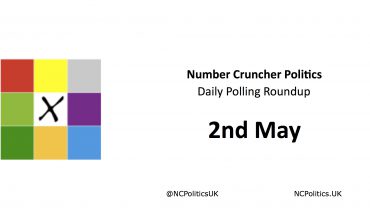