Home
Analysis
Latest Ashcroft polls look good for Labour, but again the devil is in the detail 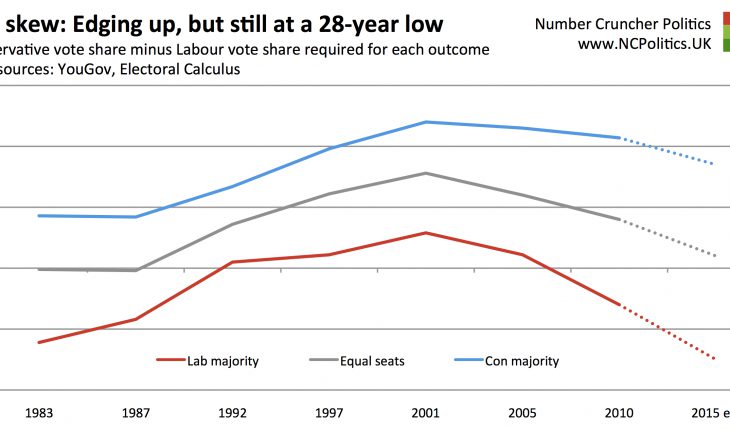 Lord Ashcroft's latest batch of marginal polling revisited seats that showed close contests the last time he polled them, which in the majority of cases was in October. Seven of them were 2010 Tory gains, with one (Southampton Itchen) being a 192-vote Labour hold last time, following a swing of over 10%. Taking the changes from October, things don’t look too encouraging for the Conservatives. Five of the 8 seats have seen a swing towards Labour since the last poll, with 2 swinging towards the Tories and Swindon South unchanged and continuing to show a dead heat between incumbent Robert Buckland and its former MP Anne Snelgrove.

On the face of it, this would imply that marginals are now swinging more than other English seats. There are a couple of caveats to this. Firslty, as Labour commentator Hopi Sen points out, there is a potential problem of regression to the mean. Because polls have shown a swing from Conservative to Labour from 2010, the “close” seats – the subject of Lord Ashcroft’s latest wave – were all ones that had been showing smaller-than-average swings in his previous polls, and in one (Southampton Itchen) a swing in the “wrong” direction. While there are always genuine differences in swings between seats, and probably more so in 2015 than usual, there is also variation due to statistical noise within the margin of error, which as Oxford’s Tom Lubbock explains is almost always more than the figure quoted. So changes from October may well be misleading due to the seats chosen.
A better comparison might be to compare the swings in these seats with the national picture. The average swing across these seats was 4.4%, less than the  selection of somewhat oddball seats in last month’s polling, but showing no change compared with October’s entire batch, whereas national polls have narrowed considerably (in other words, a smaller swing from 2010 than they showed previously). That would suggest a change in the relationship between marginals and the national picture.
A look at where within the numbers the change lies brings us on to the second caveat – the eight seats were polled in two “sub-waves”, one from late February to early March and one entirely within March, and the two show something rather different, with a 5% swing in the first batch and a 3.8% swing in the second, which dosen’t really seem to be accounted for by national polls. Looking at the first (standard voting intention) question, as asked in national polling, both batches show swings very similar to the 4.4% overall average. The difference between the sub-waves is more than accounted for by their respective changes between the first and second questions, suggesting that when voters were asked to think specifically about their constituency, there is a tactical swing in Labour’s favour in late February, but in the Conservatives’ favour in March, as there was in December.
Two groups of voters are critical to this. UKIP supporters swung more to Labour in the first sub-wave and more to the Tories in the second. Why might the Conservaties have squeezed fewer UKIP voters in late February than before or since? It’s not inconceivable that the final release of migration statistics on 26th February had an impact on the second choice of people intending to vote UKIP. The other group are the Greens, who were squeezed far more by Labour between the first and second questions in the earlier group of surverys than in the later ones, or than in December. Again, this is only a possibility, but it would seem quite a coincidence that Green campaign launch and Natalie Bennet’s interview difficulties were on February 25th, again right at the start of the fieldwork window. Lib Dem supporters appear to be staying put in all cases, despite clear evidence that they “Can’t win here”. 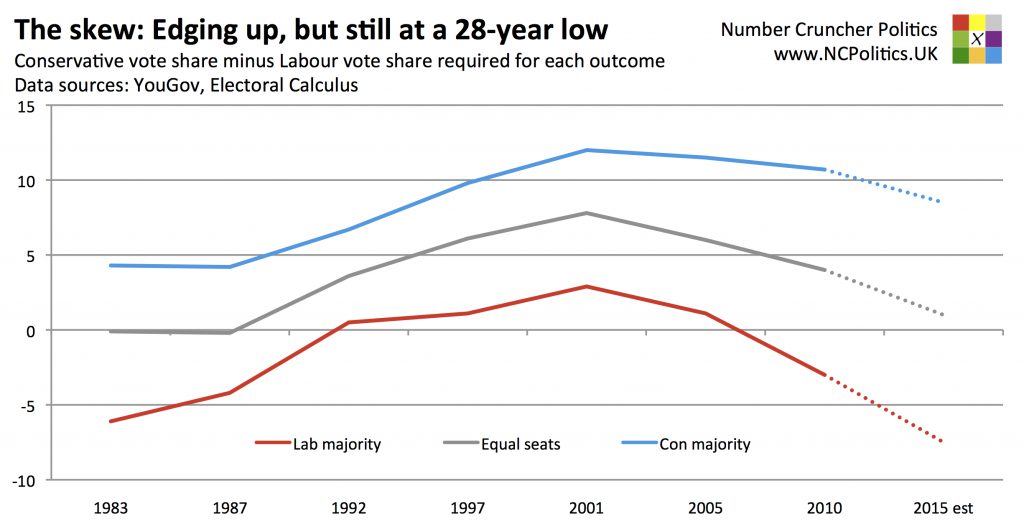 So I continue to be a bit skeptical of suggestions than the skew is widening out dramatically, but there is at least some evidence that it’s wider than I thought previously. Accordingly I’m revising my estimate up to 1 point (from 0.6 points), so I now estimate that the Conservatives would need that sort of popular vote lead to be the largest party. If seat polls continue to show disproportionate swings to Labour, then this estimate will go up further, but at moment the picture remains rather murky, so it’s not at all clear that that is the case.
Lord Ashcroft has promised further rounds of constituency polling over the next seven weeks. Elsewhere, there are rumours that ComRes are polling Thanet South, though it’s not clear whether it’s a public or private poll. I’ll keep an eye on developments, and will post any new polls on Twitter and as part of my daily roundups. 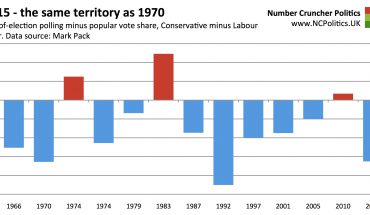