I was preparing to post about the ComRes marginals poll, when I saw this startling tweet from Lord Ashcroft:

Now the first part isn’t surprising at all – Sophie Brodie polled 21% for the Conservatives in 2010, compared with 4.3% for UKIP’s Liz Andrews, so on a uniform swing it’s no surprise that UKIP are second. But could a big two party leader really be defeated in their own seat? It hasn’t happened since Arthur Henderson (Labour) lost Burnley in the Tory landslide in 1931.

A couple of things jump out from the chart above. Firstly, Miliband took 47.3% of the vote in 2010, so in order to be vulnerable to tactical voting, he must by definition still be under 50% and probably a few points below it. So becoming Labour leader hasn’t helped him outperform the party, in fact the opposite seems to be the case. He may well even be polling a lower vote share than at the last election.
Secondly, the BNP and English Democrats between them managed a 12% share in 2010. UKIP seems to have been effective at taking votes from far-right parties, so it might have done so here. David Herdson pointed this out on PoliticalBetting six months ago – the linked piece also talks about local factors which could be relevant.
It’s also worth noting that Tory voters aren’t known for voting tactically. Would the opportunity to decapitate Labour change that? We might not know until May, but tomorrow we’ll at least have some idea how much tactical voting would be needed.
Turning to more ‘normal’ marginals, ComRes released their latest battleground poll of 25 Conservative and 15 Labour-held marginal seats. The 4% swing is equivalent to a Labour lead of just under a point nationally. Recent online polling from ComRes has been slightly more favourable to Labour than the pack as a whole, though not normally as much as their most recent national poll (which showed one of the widest Labour lead this month).
As such, the swing in the marginals looks very much like it does across Great Britain, but slightly smaller as I noted previously. I’ll revisit my analysis after the Ashcroft polling is published. 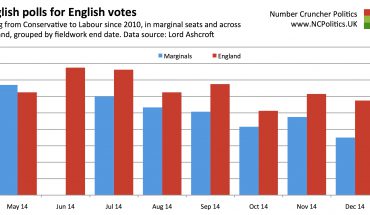