No, I’m not actually up there (this probably isn’t the best time of year to go). But there are a couple of S
cotland-related things to talk about.
Firstly we got a rare local election (first preferences) poll, by Panelbase for Wings Over Scotland:

These numbers are strange, because they show no meaningful vote for independent candidates (who usually take at least 10 per cent of the vote). I can only assume they weren’t prompted for. Otherwise, this looks like the Holyrood and Scottish Westminster poll, with a big SNP lead over the Tories and Labour third.
One talking point since the EU referendum has been whether Labour’s Scottish referendum experience can tell us anything about what we might now expect in England and Wales.
Clearly there are all sorts of differences in terms of history and trends before the respective referendums, but if we simply look at the patterns over the following month, as Chris Prosser did, they look remarkably similar.

Did a quick comparison of Labour polling after the Scottish Indy ref and the EU ref – the slopes of the trend lines are remarkably similar pic.twitter.com/9wM1w9fKbM

For anyone that needs reminding where the Scottish line is now, see this:

This is… Quite a chart https://t.co/WJIidmAvo0

Meanwhile, across the Esk, Copeland is now eight days away. As Stephen Bush explains, Theresa May’s visit might not mean anything, because these days parties often don’t know whether they’re winning or losing in a close contest.
And finally, Anthony Wells slapped down a voodoo poll that found its way into the Mirror. As always, scientific polls are the way forward unless you want to be seriously mislead… 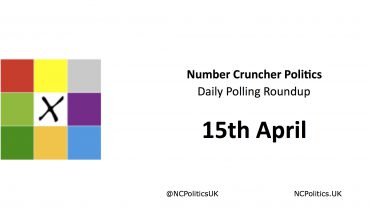