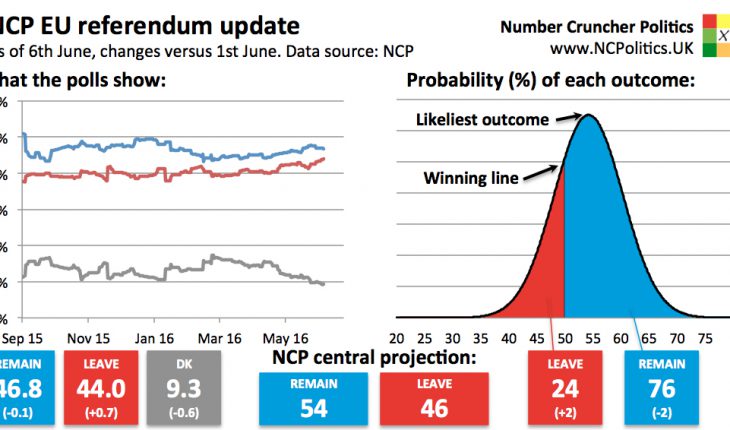 Following Cameron vs Gove events late last week, we got two new online polls, from YouGov and ICM, both putting Leave ahead. They differed slightly on the toplines, and on the timing (YouGov overlapped the TV events, ICM was mostly after) but both showed a shift towards Leave, after what was generally considered a solid performance by the Justice Secretary.
So the question naturally arose – were the Leavers winning? They certainly seem to be have had the best of the campaign so far, and polls have shown signs of a swing in their direction. But even though Twitter, betting markets and the media seem to have got very caught up in that story, it’s not the same thing as winning the referendum itself. While the campaign clearly matters, there are a couple of other things that matter too, and both favour Remain – the starting point, and where we’re likely to head going forward.
Before the late May bank holiday weekend, online polls had the race roughly neck-and-neck and phone polls had (on average) low-double digit Remain leads. Since then there has been evidence of a swing to Leave. But unless you think online polls are right and phone polls are wrong, even the changes in the those two polls would still not imply Leave actually leading.
And as for what happens from now on, there is no certainty. But history is very strongly on the side of the status quo. See this from Elections etc (Steve Fisher and Alan Renwick) and this from Peter Kellner about UK referendums, which fit very well with the international experience. The NCP forecast model is built on very similar principles – from here we’d expect a swing of about 2% (ie a 4 point net change) between now and June 23rd (including a bit after the final polls are fielded).

In other words, Leave would need to be leading by more than 4 points at this stage to be considered favourite by the model. ICM’s online poll shows a 5-point lead for Brexit, but others don’t. ORB’s latest phone poll for the Telegraph had the Remainers 12 points ahead on its “all adults” measure, which suggests that the phone vs online gap hasn’t gone away. (As ORB has now clarified that this is it’s headline measure, the polling average and forecast will be using it instead of the “certain voter” measure, though the impact will be small).
Last night’s YouGov/Times poll, the most recent available, showed Remain back in a (statistically insignificant) one-point lead. But what is significant is that a poll that had swung to Leave when the debates where taking place is now right back where it was before – suggesting either a response bias or a genuine but temporary shift in public opinion.
In any case, the picture painted by the various polls and analysis of likely accuracy, it’s much more likely that Remain is still ahead.
To recap, see the original joint paper between NCP and Populus, and my responses of some of the points raised about it (here and here). I also posted FAQs on the polling average and forecast model.
For the avoidance of doubt, the polling average is a measure of what polls (phone and online equally weighted) are saying. It does NOT adjust for expected polling error, whereas the forecast, before it projects how opinion is likely to change, first adjusts for modelled sample bias, the effect of some polls prompting for undecided voters and the fact that most polls exclude Northern Ireland, which all evidence suggests is strongly Remain.
So while everyone is having fun running around like headless chickens, the clear-headed NCP assessment is that although Leave has had a good start to the campaign, Remain is ahead, and history suggests it’s favourite to remain there.