Home
Analysis
UKIP vote decomposed – who is being hurt the most

Given the discussion about UKIP and who it is taking votes from, I thought it would make sense to look at some of the numbers. Steve Fisher produced a piece shortly after the local elections that looked at changes in national vote shares, projected from local elections. I’ll start by doing the same exercise using polling data.

First of all, here are the headline voting intentions, starting with the 2010 election and the average of YouGov’s polls for the 2nd quarter of each year since. I chose such a long period in order to iron out short term fluctuations, to get a view of the ‘underlying’ shift. It also has the benefit of a huge sample (around 85,000) and thus a tiny margin of error.

Looking, as Steve did, at the changes over two-year intervals, we can see that the polls confirm the picture. CON down 4.6, UKIP up 4.6, with LAB and LIB pretty much mirroring each other. Then from 2012 to 2014, LAB down 6.2, UKIP up 6, with CON and LIB showing practically zero change.

Of course, it isn’t quite that simple, as there is other churn taking place. But the overall picture is striking.

Now let’s look at what the poll internals say. In March 2013, YouGov published this piece showing a breakdown of UKIP voters based on their January 2013 sample (in which UKIP polled 9.1%) and another one 11 months later when UKIP were polling 12.5%. By multiplying the breakdown components by the current vote, we can see how many points of UKIP’s current polling comes from each party.

Using YouGov’s tables from this August 2014, we can calculate the same figures, but in a different way, multiplying the percentage of 2010 CON LAB and LIB votes that now intend to vote UKIP, by the 2010 vote shares.

So we can see that UKIP has hurt the Tories the most overall, but have hurt both Labour and the Lib Dems considerably more in the last year or two. One might even conclude that CON to UKIP switchers have been ‘maxed out’ and that further gains will only come from other parties.

Whether the recent defections change things in terms of proportions remains to be seen. Interpreting anything during conference season is fraught with danger due to response bias and genuine short-term volatility. 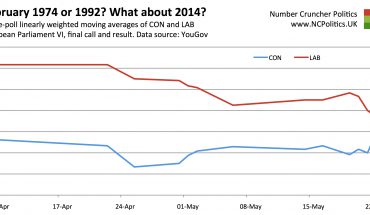