Yesterday saw the fortnightly ICM/Guardian poll, which showed similar compression between the main parties and the chasing pair to what YouGov have been showing. Full figures are:

This was ICM’s joint-lowest ever vote share for Labour since the series began in 1983. The two point drop in the Conservative vote share trims the Tory lead to 18 points. But the news for the government is less good on the supplementary questions, which suggest that the public aren’t too keen on an exit bill of anything like the one the UK is likely to get. Anthony Wells has written a good summary of this.
In local election land, we now have forecasts from both Rallings and Thrasher at Plymouth University and Lord Hayward. No huge changes in either, but the direction if travel is that the Conservatives and Lib Dems both gain compared with 2013, close to the middle of their coalition government, while Labour and UKIP look set to drop back.
And finally, Ed Miliband told Eddie Mair (deputising for Andrew Marr) how shocked he was in 2015 to see the exit poll. That’s what happens when you don’t follow NCP…
There are no polls expected today, but the Political Studies Association is holding its mayoral elections briefing (its equivalent for council elections is later this month). I’ll be there, so will tweet anything of interest. 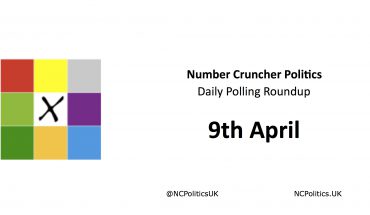