Home
Roundup
Any plans for Saturday?

It seems the UK isn't that excited about the royal wedding – by 2-to-1 Brits told YouGov they aren’t interested, and by an even greater margin, aren’t planning to watch it. Women are more than twice as enthusiastic about the wedding as men are.
But support for the monarchy itself remains solid, with only 16 per cent saying they’d be happy if the monarchy ended, 15 per cent saying parliament should get a vote on it, and 9 per cent saying they don’t like the Queen. And those numbers aren’t any higher among younger adults.
Polling Matters has looked some more at Northern Ireland, and also has interesting further analysis of the YouGov/Centre for Policy Studies polling looking at who different groups say they would never vote for.
And there are three council by-elections for four seats today. University and Scotforth Rural on Lancaster was split Labour/Green in 2015 and has two seats up for grabs, which both parties (plus the Lib Dems and Tories) putting up two candidates. Lancaster Skerton West is safe Labour. And Leiston (Suffolk Coastal) was split Tory/indy last time out, with another independent standing. 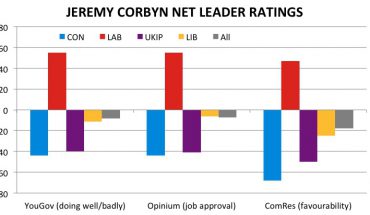