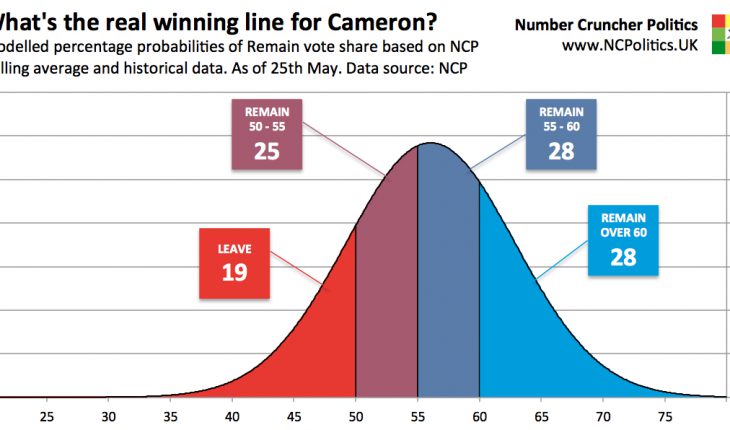 David Cameron announced Britain's EU plebiscite as an "in out referendum". On paper it is just that – a binary decision. But in practice, referendums are not binary – the margin of victory matters too.
Tom Mludzinski and others at ComRes previously looked at referendums around the world and suggested that where the establishment is backing the status quo, a resounding victory with at least 60% of the vote is required to settle the issue. The same does not apply to the insurgency, who simply need to win. Anything between the two represents a “danger zone”, as with Scotland’s independence referendum.
Tory rebel Nadine Dorries also referred to a 60-40 “large majority” on Peston on Sunday:

.@NadineDorriesMP says her “letter is already in” to challenge the PM after the #EURef #Peston https://t.co/7zmpCx3NN7

Others more sympathetic to the Prime Minister’s EU stance have talked about something in the mid 50s. I’ll save my thoughts on the psychology of round numbers to another time, and I’ll leave it to others to debate the implications of various non-Brexit outcomes for the Conservative Party and politics more broadly. But how likely is each of those scenarios?
Right now the single likeliest outcome – the peak of the NCP Brexit model‘s probability distribution (below) – is a Remain vote share of about 56%, which is of course subject to change. (For those that were going to ask, the distribution is symmetrical, so the mean, mode and median are the same). 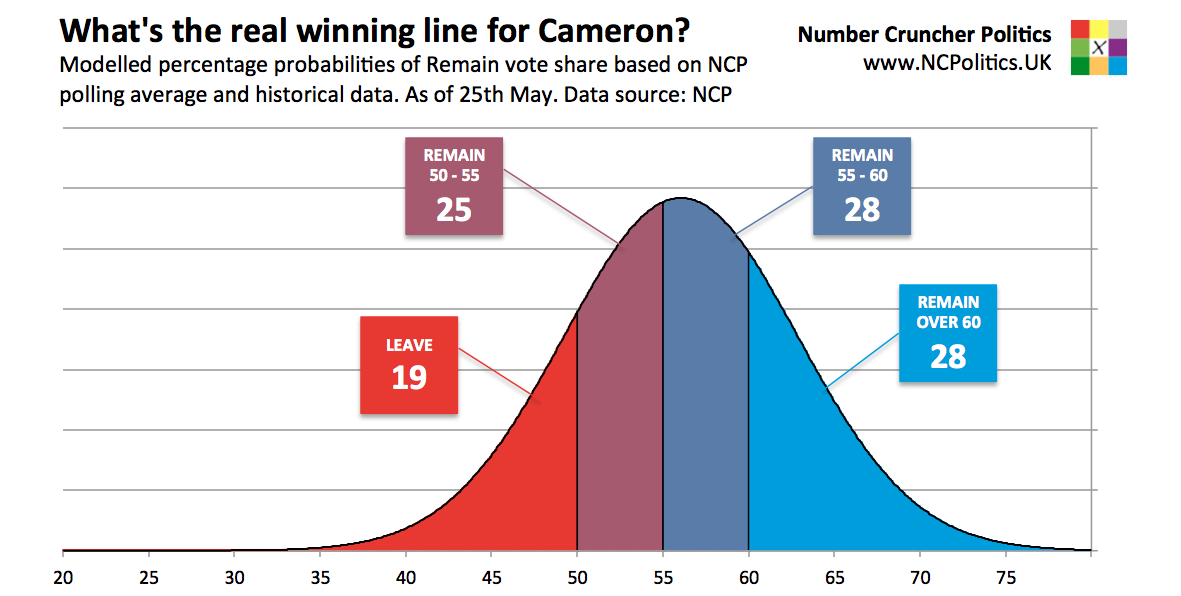 But this is surrounded by considerable uncertainty – which is why I prefer to talk in terms of probabilities rather than point estimates. So what do the probabilities suggest? At the moment, and with all the usual caveats, the modelled probability of Brexit is 19%. The total probability of a vote to Remain is therefore 81%, which breaks down into 25% chance of a Remain vote share between 50 and 55%, a 28% chance of between 55 and 60%, and a 28% chance of Remain topping the 60% mark. These numbers are additive, so the chances of Remain getting at least 55% of the vote add up to 56% likelihood. Betting markets currently show a very similar picture.
Some will be surprised to see the probability of a Remain vote of over 60% higher than the probability of one under 50% (ie Brexit). The reason is straightforward – the results of NCP’s detailed analysis of historical referendums, combined with current polling data, are consistent with a symmetrical distribution of probabilities. In other words, the likeliest outcome is equally likely to be too high as it is too low. Since that projection is currently about 56% Remain – closer to 60 than 50 – the former is likelier than the latter.
Of course it’s not just the overall result that matters – it’s easy to see how the split among Conservative voters will matter too. But there is no “right” way to estimate this. Firstly, are we talking about 2015 or current Tory voters? Secondly, since direct estimates will require asking people, which polls do we trust? We’ll know afterwards which were right, but that doesn’t solve the problems I talked about before with looking at crossbreaks. There will be “gold standard” probability surveys done afterwards, but the results of these won’t be available for months. And even if you can deal with those problems, there will still be a substantial margin of error to deal with, which matters if it’s close.
Alternatively, you could instead look at which areas are voting which way, but that too has its problems – referendum results will be counted by local authority, election results by constituency. There are ways to reconcile the two, but none is foolproof. It’s going to be an interesting few weeks…